The pianist Sviatoslav Richter received the Léonie Sonning Music Prize of DKK 100,000 at a concert held at 7.30pm on Sunday, 15 June 1986 in Tivoli Concert Hall.

The music prize was presented behind the stage after the concert by Professor Poul Birkelund.

The Léonie Sonning Music Prize is awarded to Sviatoslav Richter in admiration of his intensive art of the piano which, in a unique way, unites expression, characterisation and articulation, created by a mind and an instinct that unruffledly identifies itself with the ideal execution of the works played.

Sviatoslav Richter had been in Denmark before – once in Copenhagen, and the very first time in 1961, when he was soloist with the Horsens City Orchestra, conducted by Ib Glindemann. There are also many links between Richter and the many other recipients of the music prize: a couple of years before being awarded it, Richter played Debussy and Ravel with Daniel Barenboim as conductor of the Orchestre de Paris; the year before he played Britten’s Lachrymae in Moscow together with Yuri Bashmet; in Budapest they played Shostakovich together; the same year he accompanied Peter Schreier in Schubert’s Winterreise – and from the French festival in Tours Richter and Boulez had a close acquaintance.

The idea was that Pierre Boulez would conduct the concert, in which Richter would play Beethoven’s first piano concerto (the original plan was Stravinsky’s Capriccio), but the concert (12 June) had to be cancelled, because Sviatoslav Richter could not be found. The music agent Gösta Schwarck discovered him in Mantova in Italy and drove him to Copenhagen, where it was possible to carry out the concert on 15 June.

When the prize was to be handed over, Richter refused to receive it on stage. He was perhaps worried that the staff of the Soviet Embassy, who were present, would see how much money he received.

Poul Birkelund did, however, manage to give his speech while he and Richter were standing on the stage. Among other things, he said that "for decades Richter has in his playing of piano music been so synonymous with the innermost being of the composer as is humanly possible. No matter the era, style or nature of the music, Richter has congenially been able to add yet another dimension to the works in terms of beauty and experience. We and the Danish audience here this evening are privileged that our gratitude and tribute can be concretely expressed through the diploma of the Sonning Music Prize."

wrote, among other things:

"[...] Richter plays various roles, and it is the alternation between them that also makes it extra-interesting. He started the Rondo in C major so innocently as water from a spring, changed into a stormy Romantic, changed back again, became as distant as a murky clair obscur and then re-emerged again. He modulated so to speak between the characters while other have to make do with modulating between the keys."

"The sonata was a totality – one long breath – and the 33 variations were like navigating a river through constantly new landscapes at every bend. Their nature can be hard and tough – Richter is also a Russian in his playing. They can also be light and bubbly, or heavy and tragic. Only the lovable or humorous did not get a chance to speak in these Beethoven works – perhaps we would have encountered them in a different programme?"

"[…] But Richter can still overwhelm, quite literally in his playing, with a breathlessly violent assault, wilful concentration and a reservoir of resources of sound and technique that few others can boast [...] probably with greatest artistic impact in the two rondos, op. 51, which were transformed from classical bagatelles into protracted, many-sided sculptures with projections and ledges [...]"

"[...] This simplicity was underlined with great clarity in Richter’s interpretation. There were no great gestures, no great dynamic discharges, but instead a beautiful tracing of the melody, sparkling staccato runs and then the Richteresque pause, the eloquent pause where the whole audience listens breathlessly. Getting the music to say most when it says nothing [...]

They [The Diabelli Variations] begin with a simple waltz, but already in the first variations they are altered into unrecognisability, hacked to pieces in Richter’s powerful chord and octave playing, collected together again so they almost resemble themselves in the unassuming variations. [...] And immediately afterwards Richter opens up the deepest aspects of the late Beethoven with chords that somehow do not seem to be of this world, interpreted so painstakingly that one feels one is experiencing Beethoven here as never before – and will probably never do again [...]"

It came as a big surprise that Richter returned to Copenhagen after the concert and receiving the Danish Music Award the Sonning Music Prize. But he came back and announced a second concert in a pure Schumann program

Within a few days the concert was sold out and at that time I was engaged as a music reviewer at the Land and Folk newspaper.

Up to the day I had tried to find Richter to do a little interview with him, because I knew he was practicing in a piano business in Bredgade (street close to the concert hall). But my skills as Sherlock Holmes of music were obviously not good enough, because I did not find Richter.

The concert took place in an old and very traditional concert hall, the Odd Fellow Palace. Intimate and evocative, and I think Richter appreciated that. He was in a completely different and brilliant mood than at the price concert the month before in Tivoli's concert hall, where he was more reserved.

The crowd came in found a seat and Richter walked in and received the warm welcome from the audience. When Richter sat down, adjusted the piano chair, and concentrated on putting his hands in the piano for the first work, some children began to laugh discreetly.

The crowd burst into laughter over Richter's spontaneous reaction to the two interrupted approaches to the concert. The ice was broken, everyone relaxed and finally a well-tuned Richter could begin the concert with a smile on his lips.

I do not think it is common for many to experience Richter from his spontaneous and humorous side. But we got to see that thanks to the children, who I believe were from the Russian embassy.

The concert was absolutely amazing. No one is and was better at interpreting Schumann than Richter.

After the concert, I was so emotionally upset that I couldn't just go home again. So I decided to spontaneously seek out Richter back stage. During the concert stand, I saw a small door that I opened. It led down to a narrow hallway below the stage. In the dark I could hear voices up a steep staircase. I went up and knocked gently and opened the door to the artist's room.

I introduced myself as a music reviewer at Country and People and immediately Richter came over and put my hand up to greet me. The others in the room were Richter's companion and wife Nina Dorliak, the Russian ambassador, the concert organizer Gösta Schwarck, attendants and others.

I asked if I could take a photo of Richter and if Richter would sign a concert poster for me, which Richter did with great kindness. Then I thanked and left the company, which continued to enjoy their red wine. I was going home to write my review. How could I do Richter any justice in my poor words? Personally, I had met one of music's greatest personalities. It was a great gift I will appreciate to the end of my life. 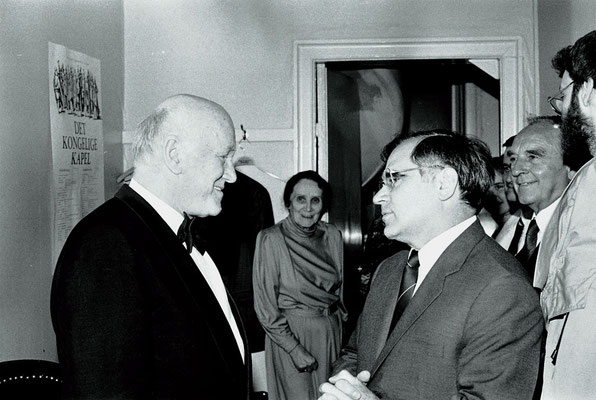 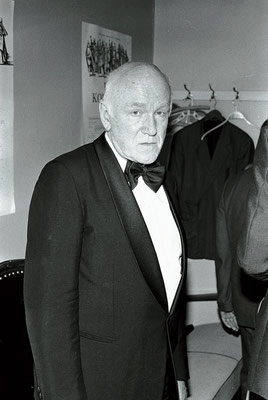 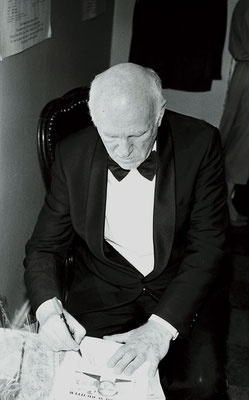 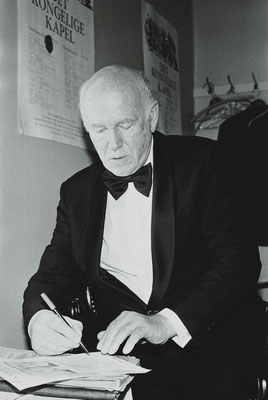 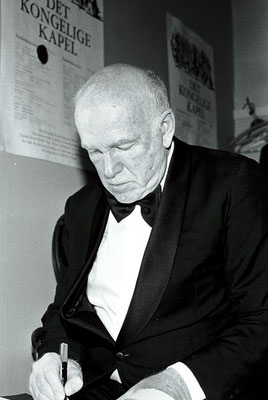 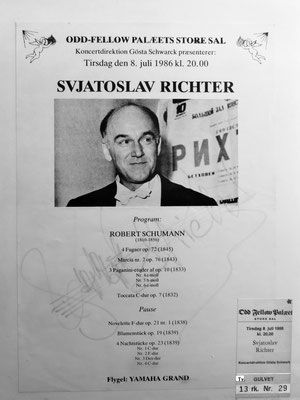